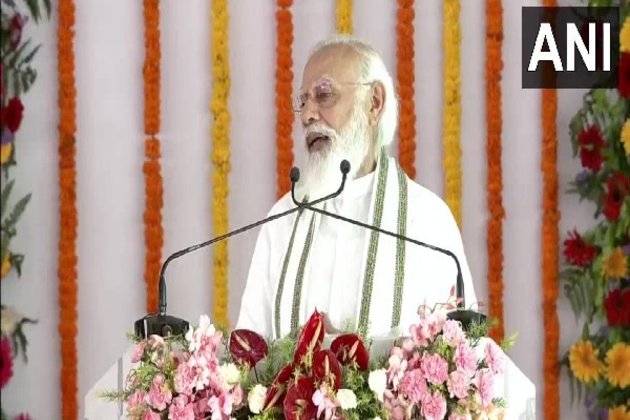 Aligarh (Uttar Pradesh) [India], September 14 (ANI): Prime Minister Narendra Modi on Tuesday lauded the Yogi Adityanath led government in Uttar Pradesh and said that the BJP government is sincerely engaged in the development of the state while the previous governments in the state were run by goons and mafias.

Speaking at the event of laying the foundation stone of Raja Mahendra Pratap Singh State University in Uttar Pradesh's Aligarh, the Prime Minister also slammed the previous government in the state and stated that there was a time when the administration in the state was run by goons and mafias.

"Uttar Pradesh is becoming an attractive place for every small and big investor of the country and the world. This happens when the right environment is created for the development," he said.

"There was a time when the administration was run by goons, governance was in the hands of the corrupt, but now such people are behind the bars," he added taking a jibe on the previous political parties who ruled in Uttar Pradesh.

The Prime Minister also said that farmers are benefitting due to the constant effort of the central government.

"It is the constant effort of the central government to give strength to the small landholders. It has taken many decisions such as the extension of Kisan Credit Card, improvement in the insurance scheme, provision of pension of Rs 3,000 among others that are empowering small farmers."Prime Minister Narendra Modi on Tuesday laid the foundation stone of Raja Mahendra Pratap Singh State University in Uttar Pradesh's Aligarh.

UP Governor Anandiben Patel and Chief Minister Yogi Adityanath were also present at the event. (ANI)