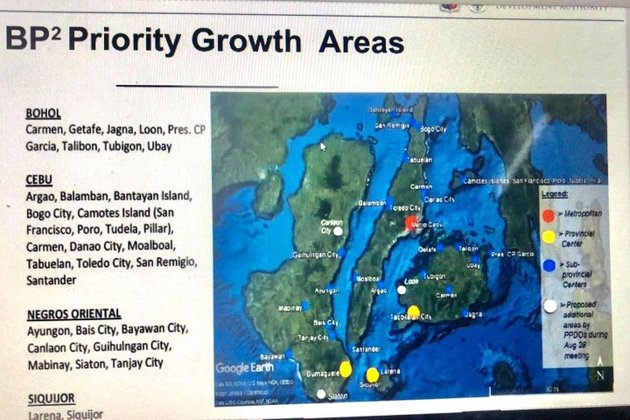 CEBU, Nov. 26 (PIA) -- Thirty towns and cities in Central Visayas are eyed as priority growth areas under the "Balik Probinsya, Bagong Pag-asa" (BP2) Program to spur countryside development, as a means to entice informal settlers in metropolitan areas to go back to their respective home provinces for good.

"Under the 'Balik Probinsya, Bagong Pag-asa' Program, low-income families living in highly urbanized cities are encouraged to go back to their home provinces, or opt to relocate to rural provinces, as long as basic necessities such as employment are facilitated," said Ruth Paul-Cruz, chief of the Economic and Development Research Division of the National Economic and Development Authority (NEDA-7) during the 4​th quarterly meeting of the Regional Development Council - Infrastructure Development Committee (RDC-IDC).

Cruz said the only way to create employment opportunities is for development to occur in the countryside.

Siquijor has two with Larena and Siquijor towns as possible sites for development.

The BP2 program largely aims to decongest the National Capital Region (NCR), including Metro Manila, after seeing the plight of informal settlers amid the pandemic, with the sector's poor conditions and high vulnerability to contracting the contagious COVID-19 disease which highlighted the problem of urban congestion.

Pres. Duterte on May 6 issued Executive Order No. 114 institutionalizing the BP2 Program as a pillar of balanced regional development, and creating a council per region to roll out the program.

According to the EO, the uncontrolled upsurge of population in the NCR brings to the fore long-standing issues on the lack of viable and sustainable employment opportunities in the countryside, unbalanced regional development, and unequal distribution of wealth.

In every region, the BP2 council is created with the chairperson of the RDC and NEDA as chair and vice-chair, respectively, with key regional line agencies as members and the active involvement of the local government units, especially where the sub-growth areas are identified.

Cruz said among the proposed interventions offered under the BP2 are the facilitation of employment matching, technical skills training, upskilling to fit for the job the industries need, and matching and access of identified program beneficiaries to available resilient housing projects or shelter financing programs of key shelter agencies.

Program beneficiaries can also be provided with start-up support such as capital, tools for those who want to start their own business after being given the necessary skills training, as well as link beneficiaries to credit facilities and insurance companies, added Cruz.

Of the total figure, Bohol has the highest number of applicants with 2,291 or 41.6 percent followed by Negros Oriental at 1,821 applicants or 33 percent.