No. 3 seed Crew hold on for playoff win over Red Bulls 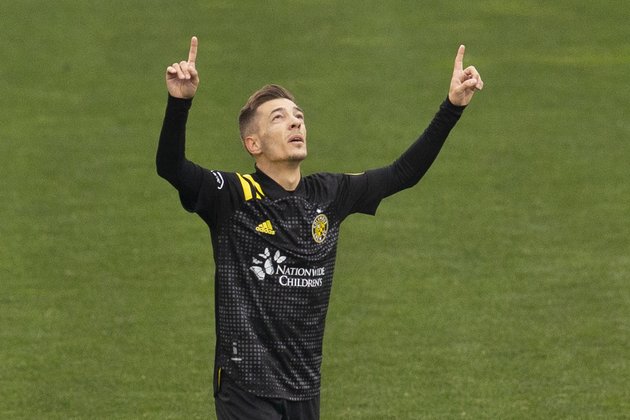 The No. 3 seed Crew will play Nov. 29 vs. the winner of the game Tuesday between Toronto FC and Nashville SC.

The Crew led 3-1 until Brian White scored with a tap-in from a scramble in the first minute of stoppage time.

Crew goalkeeper Eloy Room then made a left-footed save on Tom Barlow to preserve the precarious advantage.

After sixth-seeded New York took a 1-0 lead in the 23rd minute on a Caden Clark goal, the Crew tied it three minutes later on a Pedro Santos penalty before Nagbe made it 2-1 in the 46th and Zardes, who led the Crew in the regular season with 11 goals, built the lead in the 68th minute.

The Crew were 9-1-0 at Mapfre Stadoim in the regular season but for the first time since Sept. 7 did not have fans in attendance. The decision was made not to allow 1,500 spectators because of the high rate of COVID-19 in the Columbus area.

Clark put the Red Bulls up 1-0 with a 12-yard strike after a poor clearance by Crew defender Harrison Afful afforded him the opportunity.

Columbus tied it when Santos deposited a shot to the right bottom corner.

The Crew came out strong to start the second half and were quickly rewarded when Ryan Meara, who had eight saves, denied Derrick Etienne from the right side of the box but Nagbe was there for the rebound.

Zardes extended the lead from the build-up started by Lucas Zelarayan. He passed to Etienne on the right flank and he whipped a ball into the box that Zardes headed at the far post back toward the right post for what proved to be the difference.