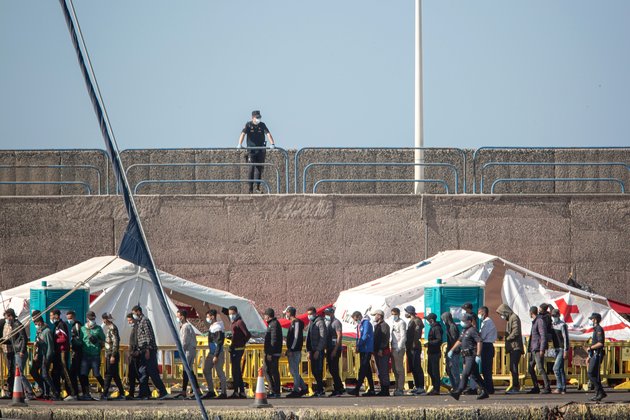 Spain continues to struggle with an influx of migrants arriving at the Canary Islands in recent weeks.

Nearly 17,000 migrants have arrived this year, which has overwhelmed a temporary facility at Arguineguin port on Gran Canaria, AFP reported. The facility was designed to hold 400, AP noted, adding that many migrants sleep on concrete and spend hours exposed to direct sunlight.

The Associated Press reported that Spanish officials opened a secondary holding facility for about 200 to try to relieve some of the pressure. Reuters on Friday reported the government also promised to open more facilities capable of holding 7,000 migrants.

Local politicians and humanitarian groups have been critical of how the Spanish government has been handling the surge in migrants, most of whom come from Morocco and Senegal.

"I recognize that we need to be self-critical because at a certain point, perhaps the conditions at Arguineguin port were not the most suitable for human beings," Defense Minister Margarita Robles told Spanish public television, TVE, according to AFP.

"We have a humanitarian crisis" in the Canary Islands and "nobody must look the other way," she said.

"[The Canary Islands] are a volcano waiting to explode," she said.

In addition to adding facilities, the Spanish government is attempting to stem the flow of migrants through diplomatic means, AFP reported, citing recent talks with Morocco and Senegal.

The Canary Islands have been a hot spot for migrants before. In 2006, 30,000 migrants reached the archipelago before stepped-up Spanish patrols slowed the pace.

At the time, Spain struck a deal with African countries that were the source of these migrants, promising financial aid in return for development programs, which made it less attractive for people to leave their home countries.