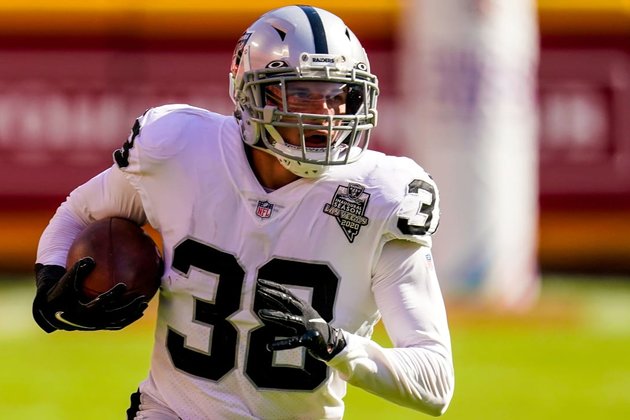 FRISCO, Texas - The analogy I keep using is that I feel like I'm on a treadmill circuit - which is a bit of a problem for me, to put it lightly.

Throughout the bye week, it felt like I was still moving even though things had ground to a halt. Now, I'm in the process of trying to hop back in at a full sprint. You don't always realize what a hamster wheel the football season is until you take a break for a minute.

I think I've got my feet back underneath me by now, though. If I needed proof, I I'll just point to the below column, in which I pulled off two of my favorites: complaining about safety play and extrapolating a bit too much about the big picture.

If you can't handle me at my Cowboys starting safety, you don't deserve me at my AFC Defensive Player of the Week.

It'd be a massive understatement to say my Twitter mentions were on fire Sunday afternoon - and for good reason. The Las Vegas Raiders beat down the Denver Broncos by a score of 37-12 during the late afternoon games, and right in the middle of it was our guy Jeff Heath.

The first-year Raider picked off Drew Lock twice on the day to go with two pass breakups, snuffing out two potential scoring drives for Denver and helping Las Vegas to a big division win.

Sometimes you don't get your flowers until it's too late, and I think that's what a lot of people are realizing. To be very clear, no one is trying to say Jeff Heath is Ed Reed. As well as he might have played on Sunday, he has actually only started one game for the Raiders this season.

But that's honestly the point. Jeff Heath is a much better football player than he ever got credit for during his time in Dallas. He's one of the few Cowboy defensive backs in recent memory who had the instincts and the ball skills required to force takeaways.

It's probably fair to say he shouldn't be a regular NFL starter - but that was always more about how the Cowboys value the safety position than Jeff Heath's problem. The guy was undrafted out of Saginaw Valley State and rose up the ranks from reserve special teamer to captain and starting safety. He should absolutely grab every opportunity put in front of him - which he once again appears to be doing as a valuable contributor for a playoff team. The problem here was always the Cowboys' aversion to investing in the safety position. When they were thin at the position in 2017, they opted to elevate Heath to a starting role - without adding much in the way of an insurance policy. When that didn't work out very well, they let Heath walk in free agency - once again, without doing very much to improve the talent left behind him.

For several years, Jeff Heath was the scapegoat for a Dallas secondary that just couldn't make enough plays. It was never fair, because the reality was that Jeff Heath was a good football player doing his best in a bad situation. Blame the front office that has done a poor job evaluating what's necessary to field a top-tier secondary before you blame the dude from Warren, Mich., who has exceeded every expectation. Is it dramatic to think that this game is a litmus test for how the rest of the season is going to go?

When I think about it, Minnesota is really the perfect opponent to determine whether the Cowboys can actually play competent football the rest of the way. There are a variety of reasons for that.

For starters, this is not a Bullseye Game, for lack of a better term. The Cowboys were bound to get up for a division rival like Philadelphia, and you're always going to give your best shot against the league's only undefeated team.

Minnesota is definitely on a roll, but this is a 4-5 team with slim hopes of winning the division. Much like the Cowboys, the Vikings are a flawed team fighting for an outside shot of making the playoffs. This is a much more even-keeled matchup than the two before it, if that makes sense.

The Vikings are also wonderful at running the ball, and defending the run has obviously been one of this team's biggest problems. Throughout this week, people have compared Minnesota to Cleveland, as the Browns are coached by Kevin Stefanski - who was the Vikings' offensive coordinator last season. The Browns ran the ball for 307 yards during their Week 4 trip to play Dallas, if you'll recall.

DeMarcus Lawrence tried his best to nip that idea in the bud on Wednesday, vowing that the Cowboys don't intend to put another performance like that on tape:

Awesome, awesome quote. Still, I hope I don't sound too cynical when I say I'd like to see it to believe it. The meaning of this game becomes clearer when you look at what lies ahead.

The Cowboys still get to play everyone in this putrid division one more time - Washington next week on Thanksgiving, with Philadelphia and New York back-to-back to close out the season. Throw in games against 2-6-1 Cincinnati and 4-6 San Francisco, and the second half of the season doesn't look so daunting. As it stands right now, that Thursday night trip to play the 6-3 Ravens is the Cowboys' only game against a winning team.

Right this second, that doesn't mean anything to me. The Cowboys could go out and get embarrassed on Sunday, and all of a sudden that manageable slate looks pretty insurmountable.

But if they continue to build on what we've seen? They don't even have to win, but if they manage to play another quality game against quality opposition, it definitely means they could string together three or four wins during the final month of the season.

And in this putrid division, that might just be good enough.